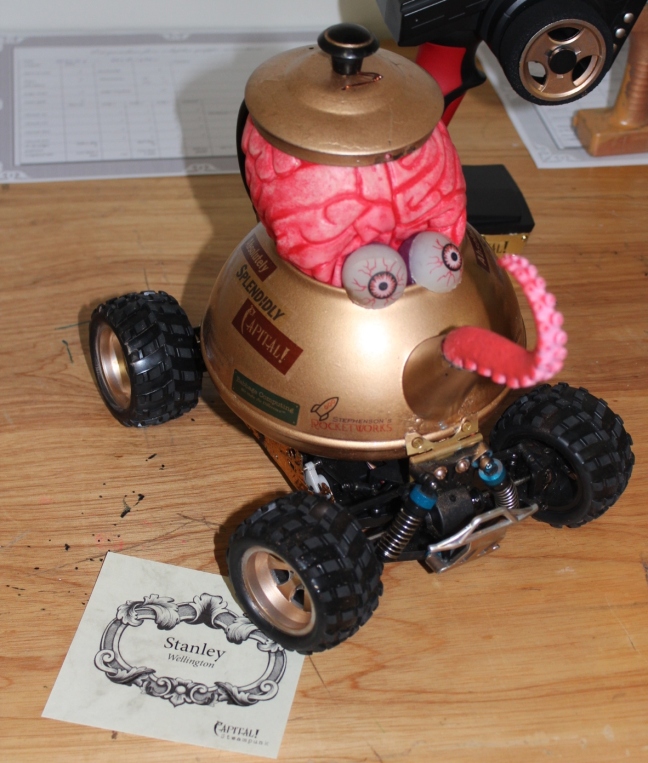 I was in Wellington recently, and was privileged to enjoy the hospitality of Mrs Hudson (the younger) and  Colonel Hawthorne from Capital! Steampunk NZ. I took the opportunity to have a ‘chat’ with Stanley, the Oamaru speed trophy winner 2015 for the fastest Splendid Racing Teapot.  At a subsonic  sound barrier shattering .43 seconds for the entire Official Course. We (the royal we)  were very impressed.

I asked Stanley what was in his innards to make him go so fast?  “I beg your pardon, that is a very personal question! But I can tell you I am made from a ‘Thumper’ which is a Jaycar vehicle.

I asked how Stanley felt about this transformation? “I feel far more intelligent and I can see better!” he stated.

I was interested and enquired why Stanley only had one tentacle? “Thats all I can fit down my spout, but I may have others I am not talking about!” This did have me very perplexed.

Stanley’s first race was at Cuba Dupa, he explained to me that for ethical reasons Colonel Hawthorne couldn’t race  him so he was raced by Aunty Donna. Stanley confided to me that, “We didn’t do so well in the obstacle course, but we won the all out drag race.”

I asked Stanley to explain the Oamaru experience, “I was very excited about Oamaru 2015, it was my first overseas trip and I had my own box in the car. I wasn’t squashed in with the hats and skirts. I was tempted to get out and play on the ferry but I decided it might not be a good idea.”

What special preparation did you do? “I did lots of brainstorming and eye rolling exercises, I did a few tentacle press ups and that was about did it. My first time on the course I felt very confident, some peppy self talk and a few stern word of encouragement form the Colonel sorted it.” It is alleged that the Colonel was overheard to say, “Play fair lad, lets show the blighters! And show the blighters we did! I did it in .43 seconds and I entered World Teapot Racing history”

For Stanley’s stunning efforts he was awarded the GT Subatomic Venom Trophy – dedicated to the Cog of Speed.

We have heard a rumor that you are retiring? “The Colonel is putting me out to stud, so I am looking for a Mrs Stanley now and to have some little teapoti.”

The last words of wisdom: “As my creator, the good Colonel says – I just like to wizz!”

2 thoughts on “Stanley – Fastest Splendid Teapot in the World.”

Splendid Teapot Racing was one of those, "will I get committed for this..." thoughts in the middle of the night but wouldn't it be FUN. I submitted the idea to SteampunkNZ Festival as concept and in conjunction with them, in 2014 I ran the very first Splendid Teapot Racing event EVER held in the World at Oamaru. Of course it wouldn't have happened with out Captain Various Miscellaneous Bitsandpieces (Norm Riley) making the course! It was a night of mayhem, hysterics and fun. Splendid Teapot Racing is inclusive, for all ages and skills levels. It is about participation and having a jolly splendid time.
Text and original images © Splendid Teapot Racing 2014. IP Simone Montgomery All rights reserved
%d bloggers like this: