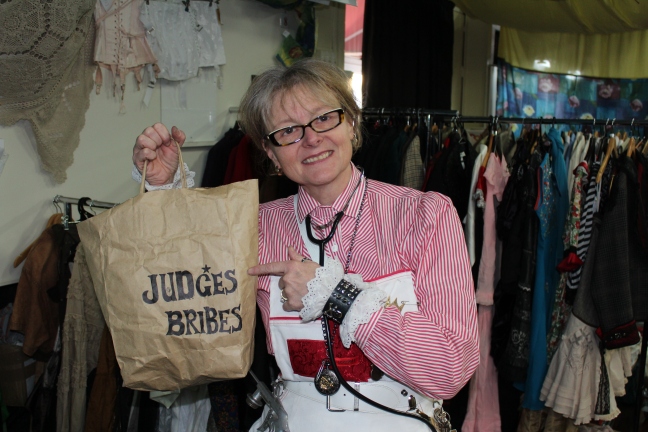 The 2014  inaugural Splendid Teapot Race was also where the very first much appreciated judge’s bribe occurred. This was from Krakens Lair and unfortunately their performance was so inexcusable that even the bribe did not make up for it!  How ever, if there was (not really) any blame to be laid, Krakens Lair would have to be responsible.I am jolly glad they did, we do encourage this sort of behaviour and extra points are awarded for ingenuity, originality, general silliness and importance to me of the bribe.

For me chocolate scores very highly as does original prose, handmade items and clever items of ingenuity. The aim for a bribe is not to be expensive or an exclusive bauble or bottles of wine. If the bribe fits in with the general theme of the team then all the better.  I have received Land Deeds to Cities, poems, shiny bits of brass and copper handy stuff, bacon and egg pie and short bread. Did I mention chocolate? The aim again is about fun and participation and a bit of performance. The best performance that we had was at Cuba Dupa February 2015 and the ATC Mark 1 Family Team from Lower Hutt  recited a Decree and presented the judges with shortbread.

Their rig was rather spectacular it was a tank style , it had a turret that spun around, with a teapot on top. The tank had a trailer with a tea cup and saucer and for the grand finale the tank erected itself and the teapot would pour a cup of tea. How is that for ingenuity – it is no wonder they received the certificate for excellence.

So in a nutshell Bribes are meant to be  fun and light hearted- a bit of koha (gift of appreciation) for the mahi (work) the organiser / judge puts in to bring this event to you.

One thought on “Judges Bribes – a Fine Art”

Splendid Teapot Racing was one of those, "will I get committed for this..." thoughts in the middle of the night but wouldn't it be FUN. I submitted the idea to SteampunkNZ Festival as concept and in conjunction with them, in 2014 I ran the very first Splendid Teapot Racing event EVER held in the World at Oamaru. Of course it wouldn't have happened with out Captain Various Miscellaneous Bitsandpieces (Norm Riley) making the course! It was a night of mayhem, hysterics and fun. Splendid Teapot Racing is inclusive, for all ages and skills levels. It is about participation and having a jolly splendid time.
Text and original images © Splendid Teapot Racing 2014. IP Simone Montgomery All rights reserved
Loading Comments...
%d bloggers like this: