Having been very pleased that the  Surrey Steampunk Convivial  now held twice a year,  had made the wonderful decision to incorporate Splendid Racing Teapots into their events, I caught up with Ben Henderson a musician and a ‘chief bottle washer’  at the Convivial.

Ben confided that he has been into steampunk perhaps even before it became ‘a thing’, as evidenced by this photo of Ben in top hat.

Ben was not sure how he heard about Splendid Teapot Racing, but he was very much impressed by the idea and the ‘sophistication’ of the course’s obstacles. Ben explained to me that at the Convivial which has been going now for 4 years, they race remote controlled vehicles, but racing the teapots “put a slightly different spin on it” which Ben liked.

A Ramp of Doom was duly constructed and lived up to its name, with a few spills and manual assists. What I particularly liked was the Ben innovatively constructed a ‘See saw of Indecision’ which worked very well. A bit of jolly good ingenuity was occurring, as toilet seat hinges were used as the pivot point. I can see that this obstacle will be incorporated into the grand plan. Thanks Ben for trying that out for us 🙂

A enthusiastic lineup turned out in fine form for the inaugural race.  Included in the line up – a pirate themed teapot – The Black Tea Spot, Barnabas – the Elephant in the room ( Ben’s rig) and a disguised or distressed Dalek were amongst the contestants. Unfortunately Barnabas had to concede defeat to a “teapot with fearsome tracks” and Ben concluded that “Barnabas is an awful pilot.” 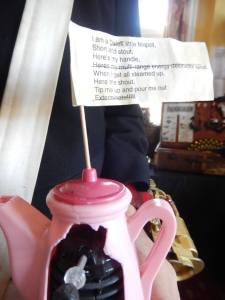 I was very impressed with the line up of wacky events that the Convivial offered, Battle Croquette, Parasol Duelling, and wait for it…… Bazooka Teddy (Just look at the photos – no explanation required) 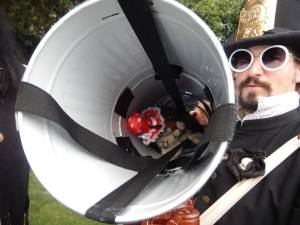 To sum up the crowd was suitably entertained and showed their appreciation with cheers,” they ooooh’d, they spluttered into their beers, they coo’ed!” at the rampaging teapots. Impressively, even in the negotiation of the death defying obstacles, not a single piece of china was damaged in the process – nearly unheard off.

Well done Surrey Steampunk Convivial – I hope to be there next year if all goes well.

For further information on their next event check out this link – The Nonsuch Christmas. It will have Christmas Pudding races…… But, rest assured there shall be more Splendid Teapot Racing at The Surrey Steampunk Convivial – Barnabas is in training, and – may the best teapot win!

Splendid Teapot Racing was one of those, "will I get committed for this..." thoughts in the middle of the night but wouldn't it be FUN. I submitted the idea to SteampunkNZ Festival as concept and in conjunction with them, in 2014 I ran the very first Splendid Teapot Racing event EVER held in the World at Oamaru. Of course it wouldn't have happened with out Captain Various Miscellaneous Bitsandpieces (Norm Riley) making the course! It was a night of mayhem, hysterics and fun. Splendid Teapot Racing is inclusive, for all ages and skills levels. It is about participation and having a jolly splendid time.
Text and original images © Splendid Teapot Racing 2014. IP Simone Montgomery All rights reserved
Loading Comments...
%d bloggers like this: